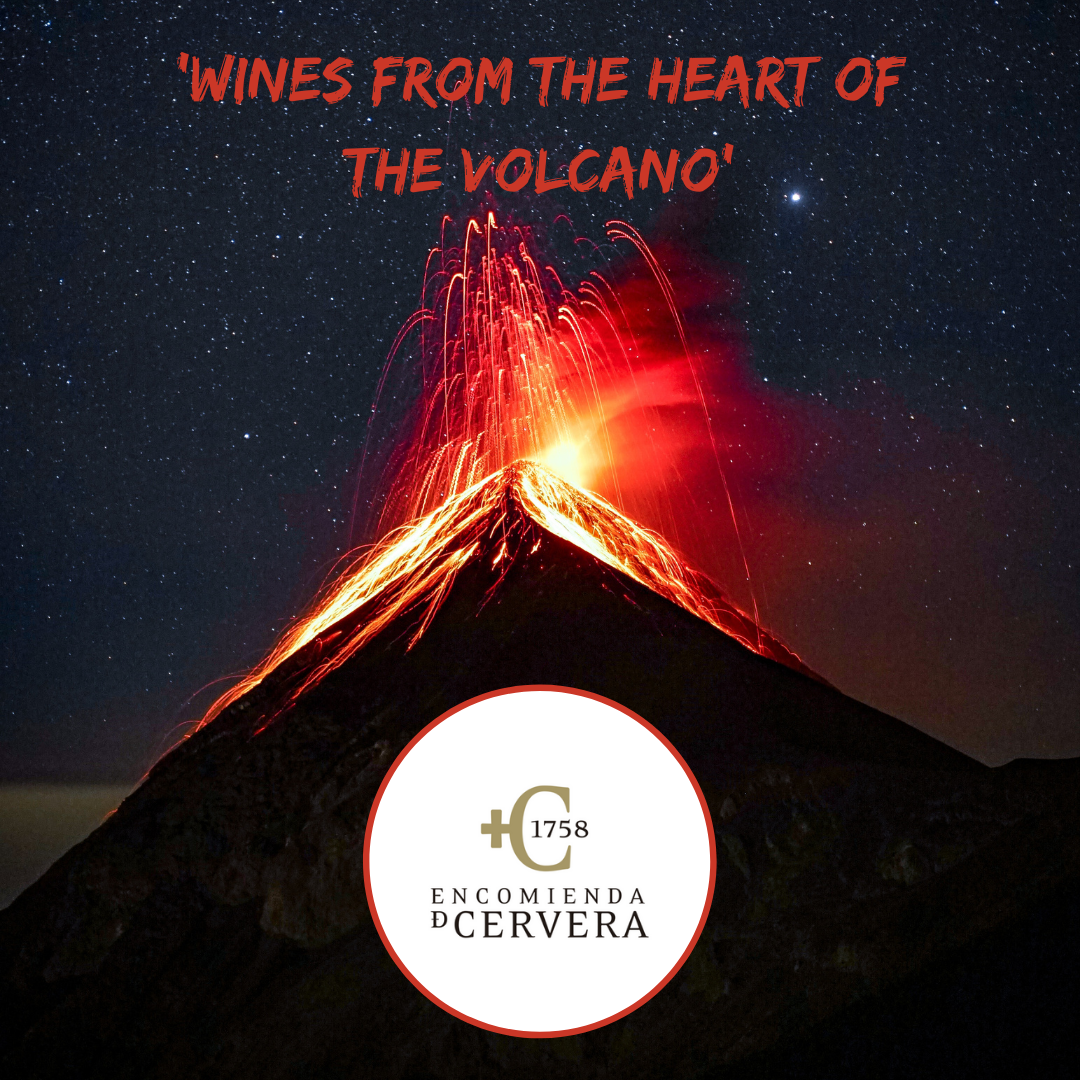 Wines from the heart of the volcano

A journey though unknown Spain,

If you read Volcano and Spain in one phrase, most people think about the Canary Islands near the Moroccan coast. But not this time. In the heart of the Volcanic Massif of Campo de Calatrava, at an altitude between 750 and 850 meters above sea level, near the cultural city of Almagro we find the Finca Encomienda de Cervera estate.

Surrounded by the ‘black lands’ of volcanic origin (D.O. Vino de la Tierra de Castilla y León) some will thing they are in one of the scenes of Lord of The Rings in the dark kingdom of Mordor. But no strange creatures or wizards here or is it? Because making fine wines in this area seems like magic, doesn’t it?

The Encomienda de Cervera estate was established around the eighteenth century around 1.758 and currently has a total of more than one thousand hectares of land.  The vineyards are around 45 hectares and the olive trees around 100 hectares. This area has a unique terroir of volcanic earth, red and chalky, stony earth, which is all due to the la Hoya de Cervera volcano. Which was designated a National Monument in 1993. The mountainous, with several drainage basins has a peculiar microclimate, with cool nights providing relief from the baking heat of the daytime. The Volcano is dorming more than 2.000 years.

Since these ancient times, the Tempranillo has been the dominant grape, and still is, nowadays other grape varieties have also been planted on the vineyards such as Cabernet Sauvignon, Syrah, Petit Verdot and Graciano. This last grape is also used in the gran reserve of the Rioja, which gives incredible finesse and ensures that the blend gets ready to drink there. Within the vineyard the determination of the best slopes and altitudes for each grape variety is given a lot of attention. By following their own in-depth soil survey, the most suitable soil for each variety is selected from the volcanic and stony soils.

The location of the vineyards are divided from North to South in a so-called ‘trellis formation’. All over the vineyards humidity sensors are installed to control the drip irrigation system at different levels in the vineyard. In the winery (originated from 1927) has been totally restored since and equipped with modern techniques to support for fermentation process. Despite of this they are also still using concrete tanks to do malolactic fermentation.

Important to note is that the wines and extra virgin olive oil are made with a higher concentration in Polyphenols, due to the characterizes of the soil, grapes and the way of fermentation used in the winery.

In the winery (originated from 1927) has been totally restored since and equipped with modern techniques to support for fermentation process. Despite of this they are also still using concrete tanks to do malolactic fermentation. Important to note is that the wines and extra virgin olive oil are made with a higher concentration in Polyphenols, due to the characterizes of the soil, grapes and the way of fermentation used in the winery.

For my tasting I tasted a couple of wines and I was so lucky to receive a sample of the olive oil produced by olive tree on these Vulcanic lands.

I first tasted the ‘’reference volcanic wine’’ made of 100% Tempranillo and the wine was matured three months in oaks barrels and after bottling the wine aged in bottles for twelve months.

The wine has a lively intense garnet color with subtitle purples reflections. The nose is powerful fresh with lots of fruit, herbs and some refined  hints of wood. On the palate the wine has a good body with aromas like red berry, red cherry and plum. All which are well balanced with the smooth tannins and the present acidity. Also hint of menthol with a twist of vanilla and toast are present in the long an pleasant finish.

This wine is made from an blend of Cabernet Sauvignon, Tempranillo and Syrah. The grapes are harvested from the best locations in the vineyard, on the slopes of the Volcano Maar de Cervera. The volcanic soil contributes to the mineral expression and refreshing acidity in the wine. Just look at this bottle, what a great cap!

The wine has a deep intense ruby red color and although it is a 2015 vintage, there is no indication of fading of the color. This shows that this blend is made of grapes with thick skins. The noise is powerful, loaded with ripe fruit and herbs from the Mediterranean with also a recognizable and distinctive aroma of menthol and minerals. The wine is complex and balanced with drying tannins with ripe fruity flavors as plum, red and blue berries, brambles, wet stones and a bit spiciness like basil, rosemary and Thyme in the long lasting finish.

At Encomienda de Cervera they were so kind to send me also a sample of their Vulcanic olive oil, which is made from old olive trees which cover an area of ​​100 ha. This particular olive oil is a blend from five different olives varieties.

After harvesting the Alfafara, Arbequina, Arroniz, Changlot Real, and Picual olives, the oil is made separately and stored in different steel tanks.

After a while the different oils are blended according to the oleologist’s criteria.

As a result of this process they produce an intense, aromatic, fruity and balanced “EXTRA VIRGIN OLIVE OIL” a so called EVOO. This blend is mild and has a spicy aftertaste where polyphenols are present in exceptional quantities.